We're excited to have some of our favorite area restaurants like Ponchatoulas and Scott's Catfish & Seafood serving up the mudbugs!

Maybe you're visiting the area and are unsure about this crustaceans craze? Have no fear! I’ve constructed a short list of everything you need to know about eating crawfish. (Also known as crayfish, crawdads or freshwater lobsters – take your pick!)

But first, a little history lesson provided to us by Louisiana Crawfish. If you're not interested, just keep scrolling!

Dating back to the native Americans and the early European settlers, the crawfish has been and inherent part of Louisiana culture. Abundant in the swamps and marshes across south Louisiana, crawfish were a favorite food of early residents. Centuries later, crawfish season in Louisiana is still exciting, with crawfish boils and backyard parties a time-honored tradition.

Commercial sales of crawfish in Louisiana began in the late 1800s. At that time, crawfish were harvested from natural waters through- out the southern region of the state. The first record of a commercial crawfish harvest in the United States was in 1880. That year, a harvest of 23,400 pounds was recorded, with a value of $2,140. By 1908, a U.S. Census report listed Louisiana’s crawfish production at 88,000 pounds, with a value of $3,600.

Technological advances have explained the growth of the Louisiana crawfish industry to include farming as well as fishing in the wild. In the 1960's, crawfish farming made its debut with the cultivation of crawfish in man-made ponds, using controlled water levels, forage management and water recalculation techniques to produce a highly marketable product.

Now, here’s what you need to know:

Only a small portion of the crawfish body is edible. Usually you’ll only bother with the tail, but if you’d like to eat like the locals, try the getting the small amount of meat found inside the claws and sucking the tasty, seasoned juices out of the head. No, I’m not joking. It’s a delicacy all its own.

Contrary to popular belief, the crawfish with straight tails were not dead when they went into the boiling pot, and they are safe to eat. Check out the study done by the LSU AgCenter that puts this myth to rest.

Eating may look complicated, but it isn't.

1. Remove the tail by pinching the head between your fingers and with your other hand pull off the tail with a slight twisting motion.

2. Peel off the shell by holding it firmly and cracking with your thumb or finger, then pulling the shell off from the side.  Some people peel the entire shell from the meat while some only remove the top portion and pull out the meat from the top.

3. Optional: De-vein the crawfish by holding the tail and peeling off the outer layer of skin. Discard it, the digestive tract is in there.

4. Pop the tail into your mouth and enjoy that serious Louisiana flavor!

Then at this point, most of us suck the heads and the claws. If it’s a larger crawfish you can pry out the small pieces of meat inside the claws.

Still need help? There are several ways! Check out the video from our friends at Visit Lake Charles for some tutorials:

And that's how you do it folks! Keep us in the conversation while you're eating local in Ruston and Lincoln Parish - #EatLocal #RustonLA #TasteLouisiana

For more information or help planning your trip to Ruston and Lincoln Parish, check out www.experienceruston.com. See you soon!

Be among the first to visit this new exhibit! 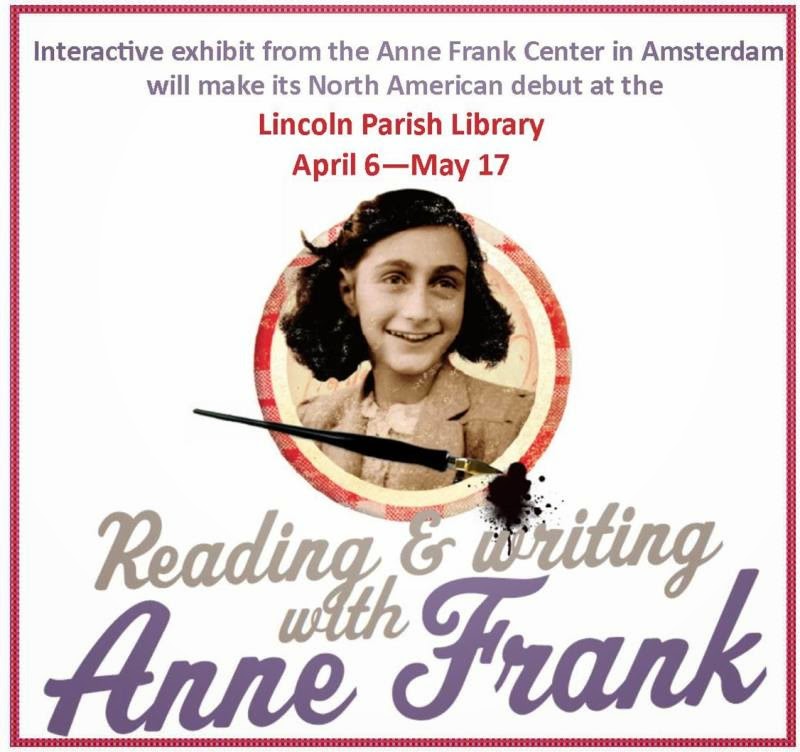 Starting Thursday, April 3, the library will host this exhibit showcasing Anne Frank's writings, as well as the books she read while she was in hiding during the Holocaust. Truly a once in a lifetime chance, come out and explore this unique exhibit and be among the first in the United States to do so!


"Most people don't realize that in addition to her diary, she wrote many short stories and a sentence book," says Emily Arnold, program coordinator for the library.


The exhibit runs from April 3 until May 17 and is free to the public. Visitors and residents alike are encouraged to come out and tour this amazing exhibit! I'm sure you'll walk away inspired!

"For such a young girl, her ability to remain positive and share her thoughts and dreams in her journal is quite remarkable. I am sure at the time, she did not realize that years later, millions would read her thoughts, her words, her stories. It is such an honor to be able to showcase an exhibit about an extraordinary girl under extraordinary circumstances," Emily also says.


We can't wait to check this out! We're also excited for the library and applaud Ms. Arnold on working to bring such unique exhibits to the area. Stay tuned for special events centered around the exhibit!

The Lincoln Parish Library is open from 9am-8pm Monday-Thursday, 9am-pm Friday and Saturday, and 1pm-5pm on Sunday. For more information, give them a call at 318-255-5030 or visit www.mylpl.org.

For more information or help planning your trip to Ruston and Lincoln Parish, check out www.experienceruston.com. See you soon!